Once again, Apple has circumvented the status quo by developing the world’s most advanced mobile device, the iPhone. Unlike the OCR driven Blackberry or the stencil managed Windows device, the iPhone combines value-added features such as a fully functional Web browser, an advanced and functional MP3 player (iPod), and a true touch screen platform, which allows users the freedom from stencil-driven bondage.

So why is this iPhone device relevant to a marketing blog? Simply from the standpoint that Apple has revolutionized the mobile market in one swoop by satisfying a true market need, namely to develop a user-friendly hand held device that facilitates efficient and easy communication.

Unlike the Blackberry I currently carry, the iPhone provides the user a true interface for instantaneous communication via a phone, Web platform, and SMS texting. Plus, the iPhone only has one button, which has completely simplified the arduous process of data entry on mobile technology … no more stencils, no more miniature keyboards, no more gadgetry features that literally take weeks to figure out; the iPhone has enhanced userability through exceptional design. Trust me, as soon as my T-Mobile contract expires, I’ll be running to the Cingular store that very day so as to move away from the soon-to-be RIM paperweight.

So as professionals, what can we take away from Apple’s example? Namely, to not get caught up in product commoditization, but to strive to deliver on a true market need. Steve Job’s innovative leadership was simply a product of assessing what the ultimate aim is in mobile technology, namely convenience and functionality, and delivering upon it. As a result, Nokia, Motorola, Samsung, and Sony Ericcson were all caught off guard and have been scrambling over the past week to formulate a response.

Posted in Misc | Comments Off on iPhone Delivers Upon Market Need 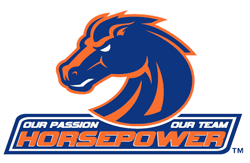 BSU, Hollywood aint got nothing on you. Surreal is a word that probably gets overused, but there’s nothing else that comes close to describing the iconic American-dream spectacle that BSU put on for us in their defeat of the Oklahoma Sooners in the Fiesta Bowl last night. Action, suspense, horror, and drama…it had it all—and then some. They say that truth is stranger than fiction, in the case of the Fiesta Bowl truth is exponentially more exhilarating than any screenplay that could ever be imagined.

If for some reason you missed the Fiesta bowl, stop what your doing and take a look at the amazing highlights of this game. Whether you’re a football fan or not has no relevance. If you’ve got a pulse, just a brief skim of the highlights will be guaranteed to quicken it. Here are few quotes from the sports world to give you a flavor:

“…it gives the game a legitimate case for being considered the greatest game of all-time … not just the greatest bowl game. As far as sheer excitement goes, it’s hard to vote against it. And 20 years from now this could be seen as one of the most important games ever…”
»Read full article
Pete Fiutak, CollegeFootballNews.com

“…a dizzying, riveting, back-and-forth game that will be remembered as one of the most exciting in college football history.”
»Read full article
– Pete Thamel, New York Times

“At the end of a game unlike any college football has ever witnessed, two of the great female icons in American culture staged a harmonic, hypnotic, borderline hallucinogenic convergence. Boise State introduced Cinderella to Lady Liberty.”
»Read full article -Pat Forde, ESPN

So what does Boise State winning the Fiesta Bowl against Oklahoma, a revered bastion of college football, have to do with marketing? Plenty, but I’ll let RisingLine principal, and BSU fan extraordinaire, Erik Warilia comment on that when he returns from Phoenix later this week. Until then, let me just say thank you Broncos for one of the most inspiring demonstrations of dedication and passion that have ever been seen in the history of sports.

The Washington Post reported Tuesday about the FTC’s ruling to “Unmask Word-of-Mouth Marketing.” The FTC is on target in my opinion. But the implication that the scams mentioned in the article are somehow representative of word-of-mouth marketing (WOMM) is misleading. The very premise and power behind WOMM is that it’s unbiased and credible. We all know that the traditional advertising spin is often quite the opposite.

As the FTC’s ruling highlights, we’re still going to deal with a segment of society that tries to beat the system. Old marketing habits may die hard, but they won’t last long in this new era of open consumer communication that’s been
enabled largely from technology like blogs. Sony Ericsson, for example, may fool a few people with their shills but they will never build a significant customer-led marketing campaign with such gimmicks. The average consumer can communicate too well now.

Idaho businesses should by no means shy away from WOMM because of this misconstrued portrayal. Like the other WOMM advocates in the Treasure Valley, RisingLine promotes marketing strategies for organizations that have proven
themselves by already developing a contingency of legitimate client advocates. We prefer to use the term customer evangelist to describe WOMM because it emphasizes the element of unsolicited motivation to share a good experience with a friend or acquaintance. A completely different concept than the shenanigans the FTC has associated with WOMM.

The important thing to understand is that true WOMM is simply encouraging honest referrals from friend to friend and it remains the most credible and cost effective means of promotion for any business or product.

Despite all the negative publicity from some pundits on the effectiveness of blogging, the current trend of corporate blogging is gaining momentum. For instance, there are twice as many Fortune 500 companies blogging today as there was a year ago, and I would estimate that number to grow substantially as the need for dynamic Web applications grows.

So why is it that corporations are starting to buy into the blogging trend? I would narrow it down to these basic factors:

– The necessity to edit and update information on the Web instantaneously

– The reality that consumers are more savvy today than a few years ago; and they demand relevant and up-to-date content via the Web

As the blogging phenomenon continues to evolve and progress, the realization that a blog is far more than a rant platform or a personal Web page will bring more companies into the fold. A blog is not simply a tool in which to share personal opinions, but rather a communications device that allows businesses like to reach out to and communicate with targeted audiences.